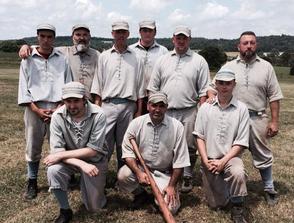 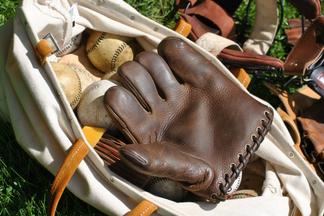 In the spring of 1998, several local fans banded together to form a tribute to the 1884 Grays, inspired by a league of similar historical base ball teams in New York. We learned the 1884 rules and style of play. Batters could call for their choice of high or low pitches. It took six balls to draw a walk. The pitcher threw from only fifty feet away. A few players wore only small gloves for protection. Most wore no gloves at all, and caught screaming line drives with their bare hands - or tried.

On June 20, 1998, we invited a New York club to Rhode Island for another "World Series" on the idyllic Bristol Common. The veteran New York team beat our nine in a doubleheader, 13-4 and 12-9. Though we showed our inexperience, there were promising moments, and fun was had by all.

Twenty years later, the Grays are still going strong, the longest run of any vintage team in New England.  We've played games from New Jersey to Block Island to the Catskills, under rules from the 1850's to 1898.  Many of those moments are documented by photos you can see on this site.  We take great pride in the level of historical accuracy we've established, and we always aim to do better.  We plan to use this site to record some of the lessons we've learned about vintage base ball and baseball history.